This bean is said to have come to America with the Pilgrims in 1620. It was incorrectly named Mayflower Bean for many years, but after learning its true name from a group of Native Americans we decided to change the name ourselves. It is what’s called a cutshort, that is to say the beans have blunt ends as if they were crowded in the slightly curved pod. The small beige beans are stippled with tiny maroon spots that converge on one end of the seed. Beautiful, flavorful, and very productive, often with 6 pods on each node.

There are no reviews yet. 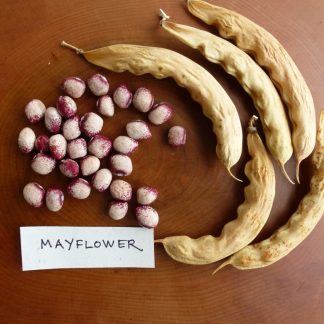